I thought that it might be of interest to some of you to see a glimpse into the planning steps I take for a historical novel, in this case, “Elijah-The Man Who Stopped the Rain”. This is what we would call part of a plotting edit. This timeline has already been condensed to a degree and allows me to view all of the historical facts, as well as animals, fauna, pictures, and maps so that I might have the facts close at hand as I write each chapter.  There is a great deal of background needed for a novel like Elijah. For instance, what are the history of Jezebel and her father Ethbaal? Ethbaal I (c. 898–866 BC) was king of the Phoenician city-state of Tyre when it was near the height of its power and Tyre dominated all of Phoenicia. In addition, Ethbaal was a priest of Astarte and of Ba’al. How does Jezebel, married to Ahab at about sixteen, successfully initiate the change in Israel’s culture with her pagan religion?

All of these details are important. I believe that to write about a historical individual, to get into the mind of someone who has actually lived, you must understand their background intimately. In this case, from a Hebrew 9th century perspective. I must limit my perspective, as much as possible, to only that time period. Yet, I always remember that some of these people were looking to the future, as we do. The language, as much as possible, should reflect their time period. Fortunately, the Bible offers great insight in this regard.

Elijah’s life continually brings to my mind our culture in the United States. Very similar threats to our sovereignty.  I believe we are on the precipice of losing our country. Within 150 years of Elijah’s bold stand against the evil king and queen of Israel, almost the entire population of Israel was either killed or taken prisoners and enslaved in other countries. Oddly, the Kingdom that allowed them to return was Persian. Much of the story of Elijah, one of the most remarkable prophets in the Bible, is in 1 Kings 17 & 18. Of note, the story doesn’t end in First Kings. The death of Ahab and Jezebel, plus the transport of Elijah are later in the Book of II Kings. The point is, that they had a chance to repent and change. They choose not to.

Below is a little tidbit. One of three types of wild tulip found in Jordan near where Elijah hid from Jezebel is the Wadi of Cherith, a Desert Tulip (Tulipa polychroma). 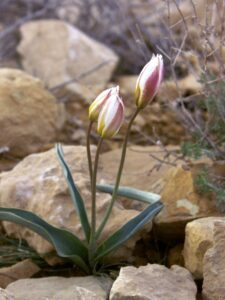